On Sunday, August 23th 2015, “The GCYS Report Seminar 2015” was held for students of elementary to high schools and their parents. 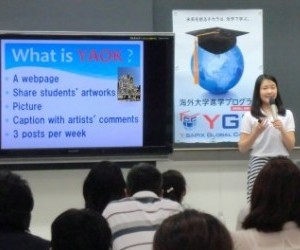 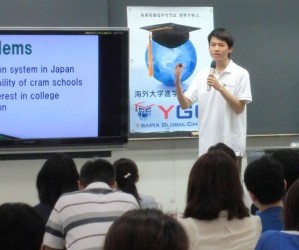 At the GCYS Report Seminar, Mr.Shintani firstly explained the general outline of the GCYS 2015, followed by the GCYS participants, Ms. Mako Matsuzaki and Mr. Hidehiko Shigemasa presenting their Glocal projects.

Mako’s presentation was based on the theme of “How to promote fostering children’s creativity,” where she shared her ideas on introducing pieces of artwork made by the students widely to the public.By creating a webpage to publish the students’ work, the project named, Young Artists of KGH (YAOK) aims to achieve providing opportunities for their creations to be seen by people all around the world and to motivate students in freely expressing themselves through the power of art.

As with Hidehiko, he has raised his concerns for the education gap between the rich and the poor. His Glocal project was based on the theme, “How to make it easier for minorities and students from low income families to attend universities.” He listed the controversial points of the current education system, and he then introduced what kind of measures the schools and the society should take to improve the current situation in a clear-cut way.

The two scholars confidently gave their presentations, both in Japanese and English.