The first half of my life, I felt very American. I was born and raised in New York and never thought I’d actually live in Japan. I spoke English every day, and really only used Japanese at home. I spent my entire childhood moving every three years. My family moved from New York to Atlanta, back to New York, to Chicago, and then to Nashville. I had to constantly meet new people and create new friendships. Ultimately, I learned that moving around was not a bad thing. My education was very diverse! In America, New York, Atlanta, Chicago, and Nashville are like different countries!

When my family briefly returned to Japan in the late 70’s, I couldn’t enter the Japanese education system. I hadn’t studied Japanese in America. I could only attend an international school. Attending ASIJ was very eye-opening. Even though it is called the American School in Japan, the student body actually included citizens from more than 50 countries! It felt like going to school in the United Nations. I got to learn with students from Europe, Israel, and all other parts of the world.
When my ASIJ classmates began applying to international boarding schools, I chose to apply to the Phillips Andover Academy. Attending the Andover Academy was extremely challenging. In fact, I think it is the most challenging thing I’ve ever done. I had to become independent. I flew to the school by myself, opened a bank account for the first time, and learned how to wash my clothes and prepare meals. Even so, I was excited to go to a school with all the things I wanted–a challenging curriculum, teachers who were former university professors, and a beautiful campus with an ice hockey rink! Andover’s motto is: “a youth from every quarter,” so my classmates and I were able to learn from each other in a very diverse environment.

No one tells you what to do after college. I knew from a young age that I liked finance and numbers. I decided to work in the financial field, but didn’t know how to start or what to pursue. I considered going into commercial banking, but my colleagues recommended I consider management consulting or investment banking. Management consulting didn’t match my background or personality, so I began to consider investment banking. In 1985-86, investment banking didn’t exist in Japan the way it existed in America. Pursuing it in Tokyo was a risk. I knew I needed to find my sweet spot, a place where I could truly contribute.
In the early 1990s, I was invited to join a big buyout called “Shinsei Bank.” Initially, this buyout was not well-received in Japan. It seemed that there was always a negative newspaper article about Shinsei Bank, accusing foreigners of coming in to take advantage of the Japanese system. Ultimately, we redeemed Shinsei Bank, hiring more than 6,000 employees and avoiding bankruptcy. Because of this, and my work with the Blackstone Group, I found my sweet spot! I introduced American-born concepts, like the corporate buyout model and investment banking, to Japanese markets. I built positive relationships between Japan and the US and encouraged acceptance of global ideas.

I think it’s very important for people to educate themselves and to stay current in their field. If you are uneducated or out-of-touch, your colleagues will ignore you, or even surpass you. It is also important to constantly develop your professional network. Make sure to build new relationships! In Japan, we really emphasize reading your textbook and memorizing data. However, it is also important to understand human relationships! How you combine your education and your professional network can lead to many opportunities.

My sons attend Brown University in the US I wanted them to go to a US university and learn the same lessons I did while living abroad. However, interest in studying abroad among most Japanese students has declined by almost 60%! I want to encourage all Japanese students to study abroad. As Japan becomes more globalized, we must learn to compete on a worldwide scale.
Students living and studying abroad need to have courage, boldness, and confidence. These qualities may go against traditional Japanese values, but they are still very important skills to develop. Students, you have to force yourselves to get out of your comfort zone and think outside of the box. Really, get uncomfortable! Doing so will help you learn and work faster.
It is also very important to give back to society. Make donating and volunteering part of your professional process. I work on the Asia Council Board of the Andover Academy and participate in recruitment and interviews. Keio University is beginning to expect this from their students and faculty, but other institutions, like Tokyo University, have not (yet). Japan has so much to offer the world; this is very important!

Japan has so much to offer the world. Non-natives love Japanese design, craftsmanship, and even Japan’s natural beauty! Foreigners are reviving “nowhere” places in Japan and renewing interest in traditional Japanese culture. Now, the Japanese have to ask: “What are our uniquely Japanese resources? How should we allocate and deploy them?”
We also need to educate people to live in today’s world. For example, when Harvard first opened, its campus was mainly in an area called Cambridge. Its early curriculum focused on religious studies and the classics. When the university bought additional land in the Allston area, it doubled the campus’ size! Rather than building more schools of liberal arts, Harvard built its first school of engineering. Just down the road, the Massachusetts Institute of Technology built the first school of AI! Our students need to study STEM subjects to stay relevant in the future.

Japanese people are very smart. We are beginning to understand that the world is changing and that we need to change too. If we don’t stay abreast of global advancements, the world will leave Japan behind. I think Japan is coming to this realization more and more, but it is an ongoing process.

You should study what you actually want to study. In my opinion, if you study what you’re interested in, you will be more successful. More importantly, you’ll be happier! Many of my classmates at Harvard Business School and Harvard Law School joined those programs only to make money. Unfortunately, many of them did not like their classes. You can pursue what you believe in. That’s the best thing for yourself and the world. 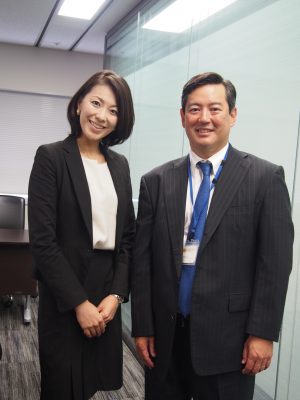