On August 6th 2016 (Saturday), we visited Phillips Exeter Academy (“Exeter”) and took part in the campus tour. Unfortunately, the school was out due to a summer break so we were unable to observe the daily lives of the students. We did however have the luxury of touring around the school facilities in private. 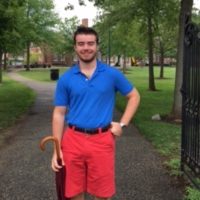 Our guide from Exeter was Reed Ouellette, a rising junior (Grade 11 from September). Reed is not a boarding student but a commuting student who lives just 5-10 minutes by car. He lives in Kingston, New Hampshire with his parents and two sisters (though they are both now in colleges). His two sisters are also graduates of Exeter. Generally, boarding students are not permitted to own a car but commuting students have special permissions to drive to school.

We were first led to the boys’ dorm. The dorms are separated by gender though the students are allowed to visit other dorms (both boys and girls) with permission. The commuting students are also permitted to spend time in the dorm’s common room. All common rooms usually have small kitchens, TVs, books (many test preparatory textbooks as well as literary novels!), pool/foosball tables, sofas, dining tables and chairs. Most students have meals in the dining halls, but some are also allowed to prepare light snacks/meals in the common room. Speaking of dining halls, the students (both boarders and commuters) are allowed to have meals three times a day in any of the few dining halls on campus. A variety of meals is provided but it seems that pizzas and pastas are the ways to the hungry scholars’ hearts. 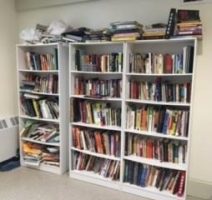 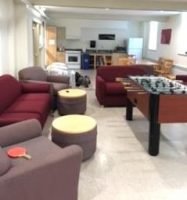 Living far from home, doing the laundry is always a concern for the students, but there is a laundry room in every dorm. Students may do their own laundries or have them done by the janitors by putting their clothes in a special bag. Most students would rather spend their precious time studying than doing their laundries so the latter seems the case of majority when it comes to dealing with dirty clothes.

Next, we were led to the Sports Hall, which has many state-of-the-art sports facilities. 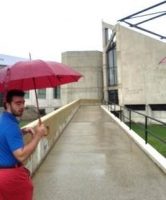 At Exeter, PE (Physical Education) is a mandatory subject. Reed belongs to the rowing team and he says that the school provides a personal trainer for weight lifting to strengthen his rowing skills. The training room seemed to be bigger than most of the average-sized fitness clubs in central Tokyo! 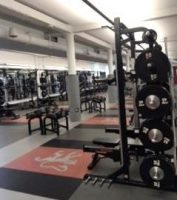 Squash is a popular sport not only among students, but also for adults as well: the courts are open to the general public. The large basketball courts are also used for graduation ceremonies and other major events usually in the case of bad weather. 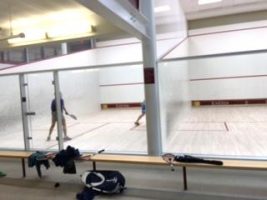 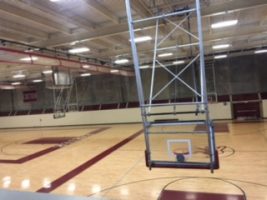 Despite all this, Exeter is planning to expand their sports facilities by adding more tennis courts and a baseball field! 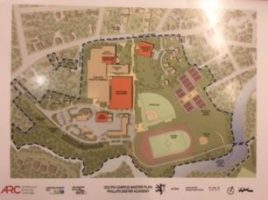 Exeter’s “Class of 1945 Library” is the world’s largest library by book volume in secondary institutions. Reed actually works at this library part-time as well as at the Admissions Office. The advantage of working at the library in particular is that he can work on his assignments and earn money at the same time. What a wise student! 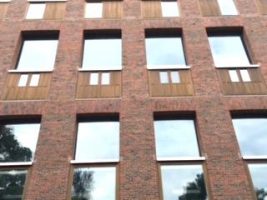 A top school in the nation also comes with a painstaking security: there are many emergency phones that operate 24 hours around the campus.

Although Exeter is not affiliated with any religion, there are major religious premises (church, mosque, temple etc.) to facilitate students of diverse backgrounds. 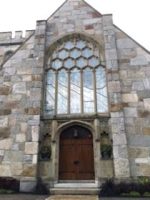 Exeter is famous for its Harkness Method of education in essentially all subjects. The photo below 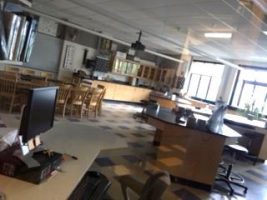 shows the Harkness table in a chemistry classroom. Inside each science classroom, there usually is a Harkness table (left), teacher’s desk (front) and an experiment lab (right).

Exeter prides itself as having the most advanced secondary education system in the country. In particular, the school puts a lot of effort into its natural science subjects. For example, in a biology class, the students and teachers went to a beach in Maine to recover the bones of a humpback whale. They all came back with the bones and put together a skeletal specimen of the whale as part of an experiment. This specimen (approximately 8.5 meter long) is now displayed at the entrance of the science building along with the photos of the whale being washed on the shore in 2000. 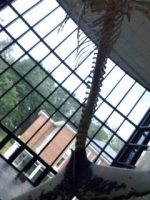 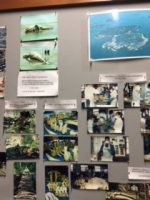 Finally, in addition to this skeletal specimen, there are other displays and unique artistic paintings in the hallways. There is even a magnificent aquarium! By taking part in the Exeter tour, it was apparent that boarding students especially are immersed in an environment that enables them to cherish their senses while strengthening their academic qualifications. 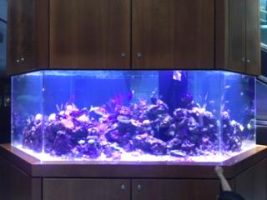 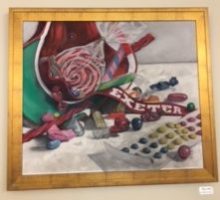