We live in a world where AI provides information according to the individual’s interests and behavior. Although we consider this to be efficient and beneficial in today’s society, it prevents the individual from encountering the unexpected. Due to this, there is a possibility that innovation cannot be sparked.
In the field of education, for example, various educational apps are utilized to provide assignments and analyze the student’s strengths and weaknesses. If efficiency is regarded as the top priority, AI would not be capable of suggesting inordinate ideas – like traveling to Bangladesh and experiencing its social landscape first hand, which I precipitously decided to do in my university years. From this day and forward, AI will become more pervasive in its coexistence with humanity. Nevertheless, I would like to raise awareness of the idea that we should not be completely reliant on AI as this may narrow the viewpoint of the users.
In fact, in today’s AI-dominated world, I value the existence of newspapers and magazines. These types of media contain information that is outside of scope of the reader’s interest. On the other hand, internet media presents information according to analysis of the user’s interest and behavior, thus resulting in the reinforcement of the user’s existing mindset. The user will not have the opportunity to encounter any unexpected ideas, which may lead to infrequency of innovation all together.

I envision a society in Japan that supports young students who want to start their own businesses. Often, if students want to create a business venture, they do not receive praise from the people surrounding them: teachers, parents, and the community. The reality is, students are pushed to focus on their studies, from junior high school through to university, and only after graduation should they contemplate starting their own businesses.
Japanese society has a strong obsession about moving unique people or ideas back into the existing intellectual framework. This action itself can have a positive effect. However, if this obsession becomes too strong, we can forget the reasons behind the action. This unawareness brings inexpressible damage to society when children are expected to endure situations that are constructed around the presuppositions and hypotheses of adults. Our society is challenged by this perseverance and tolerance. I am not an educator by profession, but I would like to see our society to propagate more social inclusiveness.

Educators are not intentionally bottling their students’ creativity; it just happens to be that way. Fortunate or not, Japan is a country with fewer shared social issues at the mass level, compared with developing nations, indicating how well-structured our society is. I once met a professor who taught entrepreneurs in developing countries. He emphasized the value of inconvenience, mentioning that “India and other third-world countries still have a lot of room for social development, so inconvenience is dealt with at a blistering rate. Countless local high-schoolers have grown into entrepreneurs. For example, one high school student built web applications to help with daily hindrances and gained many users. The existing inconveniences empower future enterprisers.”
Entrepreneurship involves unraveling the existing state of affairs. In reality, Japan has no social issues that require such immediate unraveling. In fact, if children use their imaginations and the society changes accordingly, it may actually result in breaking the fixed harmony. Such imagination is not a necessity in a rigidly structured society. Consequently, the consensus may be that since educators and students live in a world where free imagination is considered superfluous, they tend to tackle issues by utilizing preexisting methods rather than creating new ones.
Since traveling abroad has become more accessible, I advise students to go overseas to find their true inspiration. The quality of Japanese technology is second to none, enabling global issues to be grappled with by the young generation. By employing Japanese technology to solve the world’s problems, I anticipate seeing young students becoming change-makers of society and as such, more business ventures emerging from our country.

Rather than reflecting back on my mistakes, there are two things that I would like to share that I found to be quite useful during my stay in Bangladesh:

(1) Possessing at least one skill set.
I started playing the piano at age 3. There happened to be a piano in my host family’s house in Bangladesh and during my stay there, I was having a hard time communicating in English. Then, I just started playing the piano, and through the universal language of music, I was able to communicate with them and the locals. Soon after, I became very close with the local people and they started to include me in their social gatherings. Without any means to communicate, nor skills to charm people, they would not hold interest in you. If English is not your strong suit, I would recommend attaining at least one non-verbal skill, such as sports or music, so that you could inspire others in a foreign country and obtain mutual trust and understanding with the locals. And without this aspiration, having the motivation to learn English would be that much more challenging.

(2) Speaking out loudly and clearly.
During international conferences, I encounter situations where Japanese representatives would voice their opinions but the listeners would respond, “What?” The Japanese representatives would then shrivel up and gradually start to speak in a smaller tone. I believe that enunciating is more important than being conscious about accurate usage of grammar, so I suggest you just speak up and worry about the grammar thereafter! 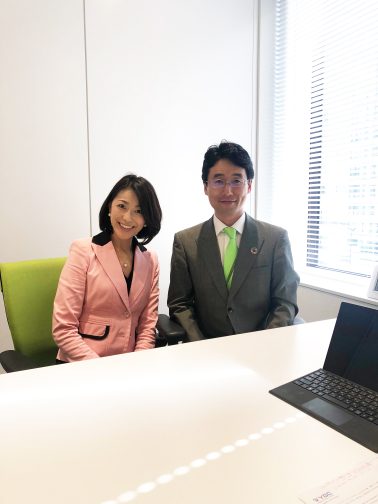 Developing your own specialization is the most vital thing. This is true even when communicating with people from overseas. Though I am not a native English speaker, people are intrigued by what I have to say simply because I am the only one who can showcase the method of cultivating euglena and generating bio-fuel for jet engines from euglena. Even if you can express yourself fluently in English, the content of your ideas has to be interesting and engaging. It is the same within the field of business: any start-up would be swept away in an instant if it does not have originality.

I often hear that meeting someone who shares the same ideology as you do is a rare accomplishment. However, I beg to differ. Some may assume that talking about euglena to people you just met may make them feel uncomfortable, just as they may also think that wearing a light green tie in front of strangers is odd. But that is what I do – I only talk about euglena, even to people I meet for the first time, which is perhaps why everyone remembers me from the first encounter. When establishing a team, most people aim for a specific person to fill a role as efficiency takes priority. But, there is no rule for when and where you meet someone with shared ambitions, so I talk about euglena indiscriminately to all the people I meet. Many Japanese people are reluctant to share their passion because they are afraid of embarrassment. What is important is sharing your passion, even if you are met with humiliation. When you do, it is highly likely that you will be rewarded with a companion you absolutely trust. Embracing serendipity instead of quality and efficiency is the key to finding a true companion.

My message to everyone is, “if I can do it, anyone can do it!” I would like to suggest to parents, teachers and the community to refrain from voicing any negative thoughts that would extenuate the child’s small spark of ambition. Any game-changer that leaves a mark in history is bombarded with countless obstacles.
When I first started the euglena business, I faced many obstacles. There were naysayers left and right. But as time passed, I met many fellow companions who share the common passion I have had and I am now enjoying my life to the fullest.
There is a high probability that you will find yourself surrounded by naysayers if you start to actualize an idea that is out of the blue and completely original. But that does not mean that you should give up on your dream. Any idea can be a seed to success as long as you persevere, and everyone has what it takes to become a global leader or a game-changer. There is no necessity for everyone to pursue this, but if you’re up for it, then go for it!

As long as there is no scientific paradox, anything can be accomplished. It is scientifically proven that euglena products help to solve malnutrition. Many say having a “100-year-span vision” is too grand. Needless to say, it is not an easy task. As of now, one in four children suffer from malnutrition in Bangladesh, but this can be cured by consuming euglena products.
I strongly value the concept of scientific reproductibility, which entails obtaining the exact same results as long as systematic action is executed in the exact same atmosphere and conditions. Science allowed mankind to build rockets and set foot on the moon. This indicates that mankind attained the ability to travel to the moon and back by accumulating scientific discoveries without a speck of paradox. That is how powerful science is. You can advance no matter the size of your vision as long as you have scientific justification. Even if you envision your dream on a large scale, you can accomplish it as long as you start off on the right foot. The value of just about anything can simply be determined by asking if it is scientifically justifiable or not.
On the other hand, I have an absolute respect towards artists. Ideas are made through instincts and inspirations where at times an anomalous concept becomes the foundation, and science plays a role in the realization process. If you depend solely on science, you may face various barriers when executing a project. We must keep in mind that any art form comprising artistic and cultural ambitions translates to a spiritual force that cannot be expressed in words. Science is key to following your dreams, but there are its limitations to creating a magnificent vision. That is when you need to trust your artistic sense and your instinct.