Hi, everyone! It’s Ayaka. This time, I would like to talk about Yamanashi Prefecture. Along with Shizuoka Prefecture, Yamanashi holds Japan’s symbol, Mt. Fuji. 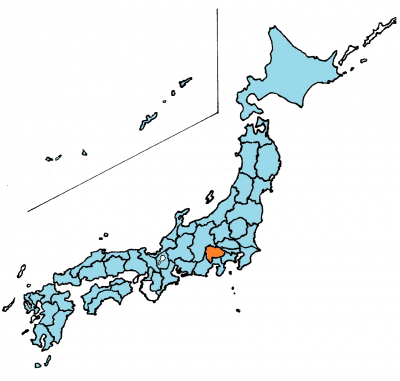 With Mt. Fuji to the South, the South Alps to the West, Mt. Yatsugatake to the North, and Okuchichibu Range to the East, Yamanashi is surrounded by a range of high mountains reaching over 2,000 meters above sea level. In fact, an astounding 80% of its area is rough mountainous terrain. Also, areas near the Five Lakes of Mt. Fuji, such as Lake Yamanaka and Lake Kawaguchi, are full of tourist attractions and leisure facilities. Many people visit these areas to escape the heat during the summer. In fact, when I was a college student, I frequently visited Lake Yamanaka for the summer camps of the cheerleading squad. I still remember the days I practiced assiduously as I admired Mt. Fuji and breathed in the clean air.

In terms of history, Yamanashi also holds great importance. Shingen Takeda, a military commander of the Warring States period, is one of the most renowned historical figures of Yamanashi. Shingen was born in Kai, present-day of Yamanashi, and eventually conquered and ruled the entire area. Though he was said to be Nobunaga Oda’s greatest rival, he died from a disease before he took on a decisive battle against Nobunaga. It is sometimes said that if Shingen had lived on for five more years, Yamanashi would have become the center of Japan – try and sense the weight of the history here!

Yamanashi is also known as the “Kingdom of Fruits.” Fruits of all kinds are grown in the mountain valleys, but the production of peaches, grapes, and Japanese plums especially is exceptional in Japan. This has given the people of Yamanashi such idiomatic phrases as “peaches and grapes are not to be bought, but to be given,” or “hard peaches must be eaten unpeeled.” Naturally, fruit picking is a popular activity in Yamanashi and personally, I have experienced grape-picking in the vineyards. The freshly picked grapes were highly addictive, and I might have eaten a bit too much. Once you try the grapes of Yamanashi you can easily determine why this area is where Japan’s first wines were made.

Currently it is not easy to reach Yamanashi by train, but there are plans to include Kofu City as one of the stops on the new Maglev Shinkansen Chuo Line to open in 2027, so Yamanashi is sure to become more accessible. Discover the charms of Yamanashi by visiting there as soon as you have the chance!