Hi, everyone! Did you learn anything new or impressive about Alaska? Let us introduce Aomori Prefecture to you this time.

By the way, have you realized the order of the prefectures presented on our website yet? For those of you who haven’t, they are in the order of the Japanese syllabary! Aichi, Aomori, … you could probably assume which prefecture will be introduced next! 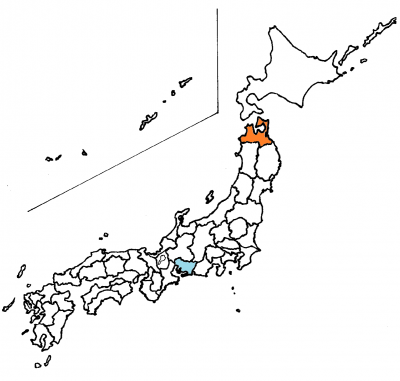 Getting back to our main theme, Aomori Prefecture is located at the northern tip of the mainland. It was called “The Province of Mutsu” until the Edo Period. Since it only takes three hours from Tokyo to Aomori by the Tohoku Bullet Train, Aomori attracts many tourists.

Aomori is blessed with nature with popular sightseeing destinations such as Lake Towada, Oirase Mountain Stream, and UNESCO World Heritage site Shirakami Mountains. At the base of Mt. Iwaki known as Tsugaru-Fuji, more than fifty varieties of apples including the Tsugaru and the Mutsu are cultivated.

Sannai-Maruyama Site, an archeological site which reveals a massive settlement of the Jomon people who inhabited about five thousand years ago, enabled us to further understand the culture of the Jomon Period since its discovery in the Aomori City in the early 1990’s. Large-scaled architecture and the cultivation of chestnuts prove the civilized culture led by the people in Aomori at that time.

Ocean-fresh tuna from Ooma Town is considered to be such a high-quality fish that it was sold for as high as \150,000,000 at the Tuna Auction in Tsukiji. Local cuisine such as “Senbei Soup” (Nanbu crackers simmered with chicken and leek), and “Ichigo-Ni”(eggs of sea urchin simmered with abalone) are also well-known.

The dialect of the Tsugaru Region called “Tsugaru-Ben” differs quite from “Nanbu Dialect” and “Shimokita Dialect” that it often seems difficult to communicate even within the same prefecture.