Hi, everyone! My name is Hiro, and I will introduce Ishikawa Prefecture this week. 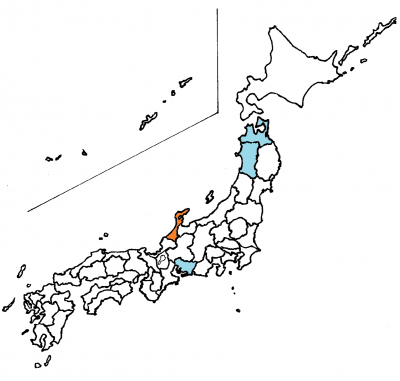 It is impossible to describe Ishikawa without referring to Kanazawa City. Do you know how long it took to travel from Tokyo to Kanazawa before the Hokuriku Bullet Train started running? With several transfers, the journey took over four hours . Thanks to the Hokuriku Bullet Train, which began operating in March, 2015, we are now able to arrive in Kanazawa in just over two hours!

Kanazawa is an area of land that has been handed down from generation to generation by the head of the Maeda family, who built a castle town (jokamachi) called “Kagahyakumangoku.” Numerous sources from that period still remain. There is an interesting theory about the origin of the name Kanazawa. Simply put, a potato digger named Fujigoro was washing potatoes when piles of gold appeared out of nowhere, and by shortening “the mountain stream (sawa) where Fujigoro washed the gold (kana)”, it came to be known as Kanazawa. The fountain where Fujigoro washed gold is said to be Kinjoreitaku, which lies adjacent to Kenrokuen. A shrine, to worship Fujigoro as a God even exists. There are various web sites that explain the summary of the story and Fujigoro, so why not look it up on the Internet when you have time?

Kanazawa is also one of the leading tourist sites that attract many visitors. Kenrokuen is especially renowned for being one of the Three Greatest Gardens in Japan, along with Kairakuen in Ibaraki Prefecture and Korakuen in Okayama Prefecture. If you have never visited Kanazawa, it is definitely well worth a visit.

What makes Ishikawa timely and noteworthy is NHK’s morning TV serial story “Mare”. The story takes place in Noto Peninsula in Ishikawa Prefecture. Many viewers may be fascinated by the magnificent scenery and the vast extent of the sea shown on the TV screen. Wajima lacquer ware made in Wajima City also appears in the story. In fact, I have traveled a little further to Noto when visiting Kanazawa once. The main purpose of the trip was to enjoy Wakura hot springs, but I still remember the stunning view from an hour-long bus ride from Kanazawa to Noto. Now that you know more fascinating sightseeing spots in addition to Kanazawa, I highly recommend you to take a trip to Ishikawa Prefecture!