Hi, everyone. This time, we would like to introduce Iwate Prefecture. 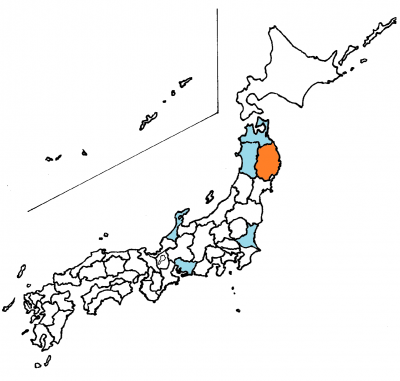 While Iwate Prefecture is famous for the Nambu ironware and Wanko Soba, its long history of digging and selling gold is another feature to note. The town of Hiraizumi, which is located in the southwestern part of Iwate prospered as “The Second Kyoto” in the 12th century. The Oshu (Northern Japan) Fujiwara, a Japanese noble family that has ruled this region for a hundred years gave rise to a glamorous culture known as “The Golden Culture” with the gold collected from the surrounding goldmine fields. Moreover, such gold played an important role in trading with the foreign countries. Chuson-ji Konjikido, a temple with both inner and outer walls covered with gold, has attracted many tourists over the years. It is said that Chuson-ji Konjikido was referred in the travelogue “The Travels of Marco Polo” (Japanese: Tohokenbunroku) as “The Golden Country Zipangu.”

Further, the products of the rich natural environment in Iwate go far beyond gold. Ryusendo, a limestone cavern renowned for its world-class water transparency, is located in Iwaizumi City, near the central coast of Iwate Prefecture. The site was chosen as one of the “One-hundred Exquisite Waters” by the Ministry of the Environment.