Hi, everyone! I’m Hiro. Do you have any plans for the Silver Week holidays? For anyone who has not decided yet, I would recommend Kagawa Prefecture, one of the four prefectures in Shikoku Area. First, let me start with a simple quiz: Shikoku is made up of four prefectures, Kagawa, Ehime, Kouchi, and Tokushima, but do you know where exactly Kagawa is located in Shikoku? Kagawa is positioned at the upper right of Shikoku, and is neighbored by Okayama in the north across the sea. 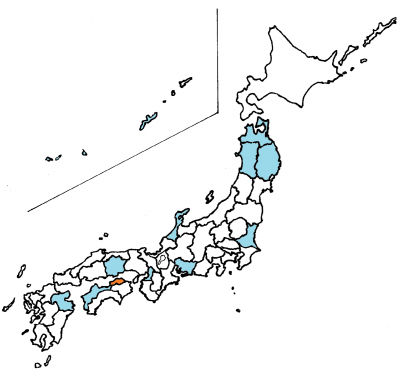 The Seto Oohashi (Grand Bridge), built over Seto Inland Sea, is the general term of the bridge that connects Kurashiki city of Okayama and Sakaide city of Kagawa. I have driven my car across Seto Oohashi once in the past, and the view was just phenomenal. It is difficult to describe in a few words the vast sea that spread before my eyes, and I remember that I was just open-jawed with excitement. The scenery is just breathtaking that it would blow away all your daily stress and trivial matters. I recommend you to go there and only wish for the same wonderful experience.

Speaking of wonderful experiences, we must not forget the udon (wheat noodle) of Kagawa. I still remember the first time I had udon in Shikoku. The firmness of the noodle, the way it smoothly slips through your throat, and the lightly colored dashi, are all sublime in quality. In the so-called “udon prefecture,” Kagawa supposedly has “udon-buses” and “udon-taxis” which take you on a tour around the most famous Sanuki-Udon spots. I cannot recall if these tours existed when I visited, but places in Kagawa are definitely becoming more accesible nowadays. Hats off to the great ideas and plans of the people of Kagawa.

Well, do you feel like visiting Kagawa now? I have mentioned two of the many charms of Kagawa so far, but before I wrap up, let me introduce you to “Nijyu-shi no hitomi (Twenty-four eyes),” a novel set in Seto Inland Sea, and written by Kagawa-born Sakae Tsuboi. This novel illustrates the tragedies of the war through the exchange of a female teacher from an all-girls’ school and her students, who eventually were engulfed in the war. I read this novel when I was a student. The storytellers who share the stories of war are aging, and there are more generations that do not know about the war. As the anniversary of the end of the Pacific War approaches, news programs and television dramas about the war are broadcasted each year. “Nijyu-shi no hitomi” has also been made into a film many times. In order to ensure that we pass on the wonderful scenery and traditional cuisine to the next generation, we must never forget the horrors of war. When visiting Kagawa, I would be grateful if you could perhaps remember what you have read in this column.