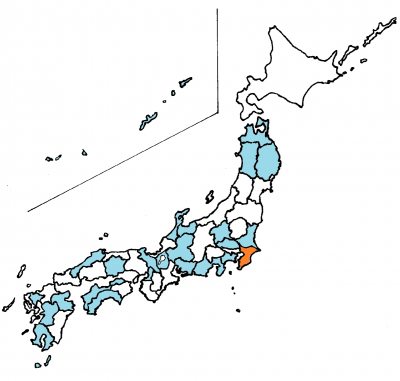 Hi! It’s Ayaka. I hope that all of the students reading this column are enjoying their spring vacation. Chiba Prefecture, which I am going to introduce this time, is a prefecture with many interesting aspects. While new commuter towns have been constructed in Chiba due to its close proximity to Tokyo, there also are places like the Boso Peninsula, renowned for its fishing and agriculture industries. Now, if you were to go on a trip to Chiba, where would you go? I suppose that many of your answers would include that famous theme park everyone loves. But today, YGC and I would like to suggest to you a cultural trip; yes, “A Tour around Chiba’s Temples and Shrines”!

1. Naritasan-shinshouji; Chiba’s most recognized temple!
With over 1,000 years of history and a distance of 20 minutes by car from Narita airport, Naritasan-shinshouji has one of Kanto’s leading numbers of visitors. It is a core temple of Shingon-shu Chizan-ha (a Japanese sect of Shingon Buddhism), and approximately 3.05 million people visited the temple on New Year’s Day, coming in second right after the Meiji Shrine in Tokyo. “Setsubun-e” takes place here every year on Setsubun (February 3rd), and celebrities throwing beans on this day is often broadcasted on national television. Throughout the course of the year, the number of people who visit rises up to about 10 million people!

2. Interested in seeing large Buddha statues? Look no further than Nihonji and Jyorakusanmantokuji!
You might remember us introducing to you the largest Buddha statue in Japan in one of our previous columns. To jog your memory, Japan’s largest Buddha statue is the Ushiku Buddha in Ibaraki prefecture, with its towering height of 120 meters, holding the Guinness World Record title as the world’s largest bronze statue. But have you ever heard of the largest stone Buddha statue? That would be the Yakushirurikonyorai in Nihonji, located in Mt. Nokogiri at the southern part of Boso Peninsula. It is about 31 meters tall, twice as large as the Great Buddha in Nara. At the top of Mt. Nokogiri, there is spot called Jigoku-nozoki (which translates into “peering into Hell”), where visitors can peer down into the 100 meter drop from a bedrock that sticks out of a cliff. How thrilling!

Another of Chiba’s collection of large Buddha statues is 16 meters tall Nenhanbutsu, which represents the appearance of Buddha when he passed. This statue is located in Tateyama city’s Jyorakusanmantokuji, and this temple is said to give divine favor for the legs and loins. This brings many elderly people to Jyorakusanmantokuji in hopes of staying strong and agile even with age.

3. Want to become a better cook? Visit Takabe Shrine, where the God of cooking awaits!
Takabe Shrine in Minami-Boso City is the only shrine in Japan that worships the God of cooking. It is said that visiting this shrine will make you a good cook, and interestingly enough it isn’t only chefs who visit but women too, especially those who want to cook and impress the men that they are interested in!

With over 6,000 shrines and temples located in Chiba Prefecture alone, it is impossible to cover all of them in this column. Cherry blossom season has just arrived, so may I suggest to you a trip of visiting temples and shrines whilst enjoying the bloom? Chiba offers many temples and shrines with breathtaking views of cherry blossoms, so I highly recommend you plan a trip to this wonderful prefecture this spring!