Hello readers! It’s Fumi. I hope many of you enjoyed your time during the Golden Week, and sincerely hope the YGC’s Prefecture Guide can shed some light when contemplating your next domestic destination. The next consecutive holiday is not until July, so in the meantime I will introduce an adventurous prefecture that the whole family could spontaneously enjoy on the weekends: Tochigi Prefecture. 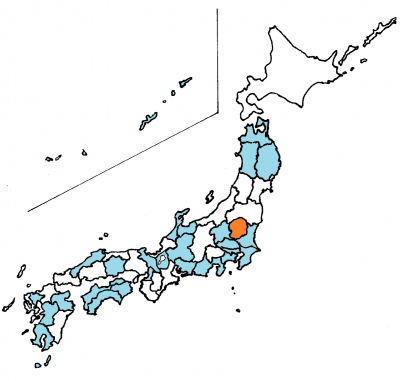 Tochigi is one of the eight prefectures in Japan that is not in direct adjacent to the ocean, and considering the proximity from Tokyo (three hours by car; two hours by train) and the myriads of tourist attractions from hot springs to world heritage sites, Tochigi is favored by many people of young generation. Through this article, I would like to focus on the Nikko area, Nasu area and unique local products of Tochigi.

The Nikko area is avowed for its beautiful autumn sceneries and the Nikko-Toshogu Shrine. On May 17th, an event at the shrine honoring Tokugawa Ieyasu’s (a famous Japanese feudal leader) 400th anniversary after his death will be held. As aforementioned in our Shizuoka column, it is unknown whether Tokugawa’s body is entombed in Tochigi’s Nikko-Toshogu Shrine or Shizuoka’s Kunozan-Toshogu Shrine. If you closely examine the architectural details of the Nikko-Toshogu, you could see sculptures of animals scattered across the edifice. One of the most famous sculptures on the enshrinement is the “sleeping cat,” where it is said that the cat is only pretending to sleep in a forward leaning position in preparedness to strike at any time to protect Ieyasu. There however is another theory surrounding the cat: it is said to be a hidden message that the cat continues to sleep notwithstanding the birds flying around in the backyard, symbolizing the peaceful state of the temple and its surroundings.

For a somatic experience in the Nikko area, there is a theme park called the Edo-Wonderland, where you could relish the recreated town from during the Edo period. Here, you could commingle with the costumed staffs that mill around in the Edo Period, and take part in actual jobs that existed during the Edo Period. It surely is a fun, interactive way to learn about our Japanese history.

To the east of the Nikko area lies the Nasu area. The Nasu area is famous for its hot springs and the many accommodations from villas to hotels around the remarkable Nasu-Onsennkyo which has been in business since year 630. If you wish to be immersed in the vast nature of Nasu, drop by the theme park where you could cavort with the animals. This past year, the monkeys (this year’s Chinese zodiac) at the Nasu World Monkey Park attracted a lot of media attention where many families photographed with them for their 2016 New Year’s greeting cards. Its main attraction at the park is the hilarious monkey show, but riding on and interacting with the elephants are also popular, which indeed are rare experiences in Japan. At Nasu Animal Kingdom, you could spectate the shows and performances by cats, eagles and owls, and see with your own eyes the true potential of the animals; certainly not something you come across every day.

Finally, you cannot get by without knowing that Tochigi is most famous for its fried dumplings (also known as Utsunomiya Gyoza) and the Tochiotome, a distinguished local brand of strawberries. The Utsunomiya Gyoza is known for its overly stuffed healthy vegetables, which can be savored in 200 different restaurants within Utsunomiya (the largest city in Tochigi). When it comes to the consumption of fried dumplings, Utsunomiya ranks one of the highest (ranked first from 1995 to 2010) in the country, though recently been outranked by Hamamatsu (except in 2013). In 2013, Sanomaru, a mascot of the city of Sano won the yurukyara (mascot) competition, and is beloved for its Sano Ramen, wearing a ramen bowl as a hat and wielding a fried potato as a katana (traditional Japanese sword). As with the strawberries, Tochigi produces them the most domestically, followed by other essential ingredients distinctive to Japanese diet such as dried gourd shavings and two-rowed barley (mainly used for beer production.). Subsequently, Tochigi has a 90% share in strawberry production, where many people visit Tochigi during December to March to pick fresh strawberries, and a whopping 98% share with dried gourd shavings. Additionally, Tochigi ranks second when it comes to the share of garlic chives and konnyaku (a jelly-like food made from starch of devil’s tongue). Tochigi sure does produce many unique local products!

From a few visits alone just last year, there seems to be something about Tochigi that I newly or interestingly discover each time I visit the area. And with ease of accessibility and so many places to stopover, why not venture on a getaway this weekend?