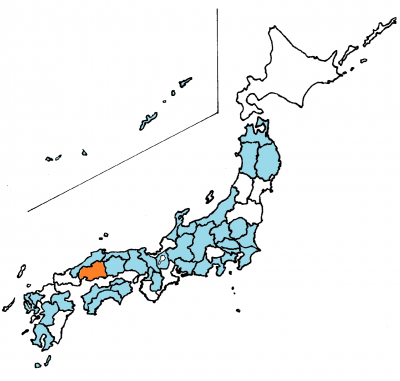 Hi, everyone! Did you enjoy your summer vacation? While the latter half of YGC’s summer term is about to end, why not get to know a little more about Hiroshima Prefecture?
There are currently sixteen cultural heritages and four natural heritage sites in Japan listed by the UNESCO, including the National Museum of Western Art, which was registered in July this year. Out of the sixteen, two are located in Hiroshima. Would you know which ones they are?

The first is the Itsukushima Shrine. This shrine was first built sometime in the 6th century, during the era of the Suiko Empress. During the Heian Period, the deeply pious Kiyomori Shogun ordered the shrine to be expanded onto the water, as we see today. The style is known as Shinden-zukuri and can be seen in much of the palatial architecture of that time. The island upon which the shrine was built was believed to be God’s land and therefore, the shrine had to lie over the water so as to not damage the land. Moreover, the Otorii (the large gate), the symbolic entrance of the shrine, is in fact not buried in the seabed but stands on it with exquisite balance.

The second major heritage site is the Genbaku Dome. In 1945, the American atomic bomb exploded almost directly above this dome and destroyed much of the city. However, the dome was left standing. Earlier this year in May, President Obama was the first sitting U.S. President to visit Hiroshima, where he gave a speech expressing his condolence towards the city and all the victims of the Second World War. As the President mentioned in his speech, the Genbaku Dome has become a symbol of something “We come to ponder” as “the terrible force unleashed in a not-so-distant past.” The dome now has the role of reminding future generations of the consequences of war.

In addition to embodying Japan’s long history, the prefecture is blessed with an abundance of traditional cuisine and delicacies. Firstly, there is the seafood. The oysters found in the coastal waters of Hiroshima are known to be delectable, but anago-don (flavored sea-eel topped on rice cooked with its bone) is also not to be missed. Secondly, Hiroshima-yaki is another famously popular treat you will see at the airport and major train stations. Unlike Okonomiyaki in Osaka, Hiroshima-yaki is made with large amount of cabbages layered with various toppings and wrapped with crepe-like dough, eggs, and other ingredients. And finally, if you are sweet-toothed, we recommend the famous momiji-manju (steamed red bean bun in the shape of a maple leaf) and Inno Island’s Hassaku-Daifuku. Hassaku is a type of an orange with an exotic bitter-sweetness where the Daifuku wraps the citrus with white beans and orange-mochi. Hiroshima’s cuisine is actually quite a challenge to cook at home, so it’s best to come out and try it for yourself!