Hi, everyone! I’m Hiro. Since summer vacation is almost over, I truly hope you finished your homework! 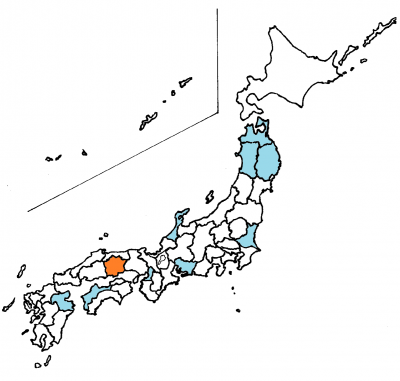 I will now introduce Okayama Prefecture. It is on the east side of Hiroshima Prefecture and on the west side of Hyogo Prefecture. On the map, it is located beneath Tottori Prefecture and above Kagawa Prefecture. The land of Okayama Prefecture with some parts of Hiroshima and Kagawa used to be called Kibi no Kuni. What do you recall when you hear of Kibi no Kuni? Of course, the Kibi dango (rice dumpling). And when you hear of Kibi dango, what comes across your mind? Certainly, Momotaro. There is a statue of Momotaro in front of JR Okayama station. Unfortunately, I do not have any pictures to show you, but I believe he was quite handsome. When you have a chance to visit, how about taking a photo with that statue?

Okayama Prefecture is not only known for Momotaro and Kibi dango. In fact, it produces the largest amount of jeans and school uniforms in Japan! You can see documents related to school uniforms and even try them on in Kojima School Uniform Museum, located in Kojima in Kurashiki City. I hear that there is also a street called Jeans Street in Okayama, so you can enjoy trying on jeans and buying them.

Another noteworthy feature of Okayama Prefecture is that it is the birthplace of Tsuyoshi Inukai, the former Prime Minister of Japan. You have probably heard of his name, since it definitely appears in textbooks. He was born in Kaya County of Bicchu Province (present Okayama City). He played a major role in the group of supporters of the Constitution, where he suggested disarmament. However, young officers were against his opinion, hence deemed as dangerous. They assassinated him because he was in the way of their plan to build a military-led administration. This has widely become known as the May 15th Incident in Japanese history. The renowned phrase, “You’ll understand when we’ll talk” was emitted by Inukai when young officers suddenly barged into his house. Had he not been assassinated then, Japan may not have gotten involved in World War II. We must never forget the foundations Mr. Inukai’s desire for peace.