This time we are going to introduce Kumamoto, a prefecture especially known for its mascot character “Kumamon.” 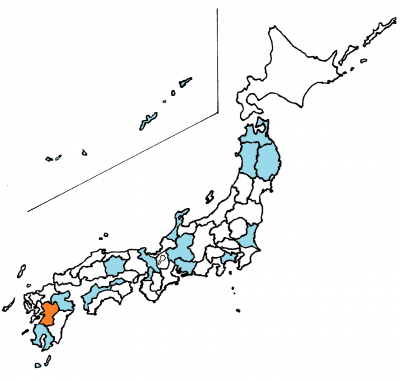 Recently, we hear news about volcano eruptions in Japan. Mt. Aso, which erupted in the middle of September, is a volcano in Kumamoto. Although access to the crater is still limited due to the eruption, it has one of the world’s largest calderas and it is well known as the symbol of Kumamoto. Facilities where you could enjoy hot-air balloons and other outdoor sports such as paragliding in the great nature, and a farm where you could see animals are located far from the crater, so you could enjoy them without concerns of access limitations. 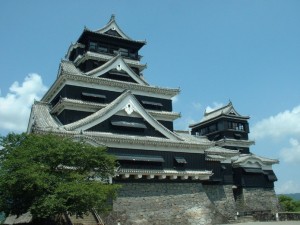 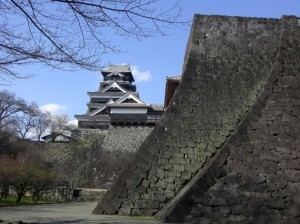 For tourist attractions, there is the Kumamoto Castle, one of Japan’s three great castles. It has been ranked first three years in a row in “Japan’s Castle Ranking” survey conducted by one of the biggest tourist buzz marketing sites in the world. This proves that the castle is popular in Japan, but also among many visitors from foreign countries. As you can see from the picture on the right, Kumamoto Castle is famous for its stone wall structure called “Musha-gaeshi,” where it becomes vertical as you get to the top. The stone wall in front of Kumamoto city municipal office is said to be the longest in Japan.

Kumamoto Castle operates a system called “Hitokuchi Joshu (contributor castellan),” in which you will be certified as the owner of the castle and have your name written in the castle keep if you donate more than ten thousand yen. Moreover, you will receive a certificate and a bill when you become a castellan. The bill is known to be a very useful system as you will be granted entrance to sixteen facilities, such as Kumamoto Museum and Kumamoto Zoo for free and also get a discount when you shop, valid for one year.

Kumamoto, a prefecture surrounded by mountains and oceans, is one of Japan’s farming prefectures. Aside from its specialties such as tomatoes and strawberries, Kumamoto has many delicious food such as horse meat, mustard lotus root, and Kumamoto ramen known for its rich pork based soup.

Viewing of the beautiful autumn leaves is currently in season in Kumamoto. Why not go to Kumamoto and feel the great nature, learn about its history and savor some delicious food?