Hello, everyone! This is Ayaka. Here at YGC, our Second Term just finished last week and after a week off, we will be commencing our Third Term. Classes that started in April this year have finally come to the final term. We would like to continue enjoying our classes with all the students until the very last day of the academic year.

Today, I would like to introduce Gunma Prefecture, which has recently been spotlighted for Tomioka Silk Mill’s registration in the World Heritage Site and for “Gunma-chan” which won first prize in the “Yuru-kyara grand prix” last year. 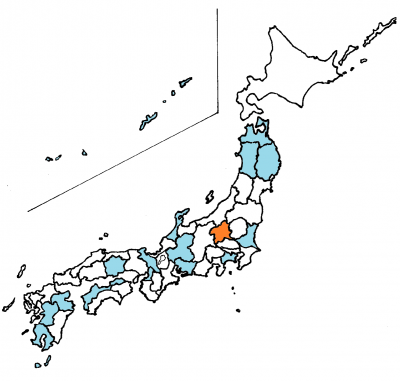 When you think of Gunma Prefecture, I assume that many people imagine of Kusatsu hot spring. It is one of the three most famous hot springs in Japan along with Gero hot spring in Gifu Prefecture and Arima hot spring in Hyogo Prefecture. Its natural amount of water output is the largest in Japan, with over 30,000 liters of water of the hot water spring sprung out every minute! Walking around Kusatsu’s symbol while being surrounded by the scent of sulfur is just the perennial way to tour Kusatsu. Aside from Kusatsu, there are many hot springs in Gunma such as the Ikaho hot spring, Mizugami hot spring, and Manza hot spring. It goes without saying that Gunma is known as one of Japan’s hot spring prefectures.

Gunma is sometimes called by its other name, “Jyoshuu”. Do you know the three famous “ka’s” in Jyoshuu? The answers are “kaminari,” “karakkaze,” and “kakaadennka.” The first two words are used to describe Gunma’s weather. So why then is the word “kakaadennka” used as a symbol of Gunma Prefecture? When you hear the word “kakaadennka,” you may imagine “a husband being henpecked.” It is actually a little different in Gunma. In Gunma, Tomioka Silk Mill is famous as mentioned in the beginning, thus sericulture (cotton spinning) was popular and it was said that women who worked in this industry had higher income than their husbands. Husbands would often compliment their wives by saying that “they are the world’s finest,” meaning that they are hardworking. Women of Gunma truly were the pioneers of social advancement.

Finally, I would like to introduce an unusual dialect in Gunma. When counting from one, people in Gunma utter a unique tune between 11 and 20. If anyone around you is from Gunma, try counting the numbers together!