This time, we would like to introduce Saga Prefecture, located in north western Kyushu. 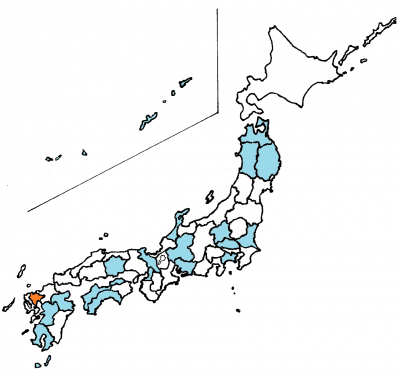 Known as one of the three main morning market cities in Japan, Yobuko City’s market in Saga Prefecture is open from 7:30am to noon and has about fifty stands offering a variety of fresh seafood and farm produce. The most popular item in this market is squid. The squids in Yobuko are thick and chewy. Last November, when a Wii U game called Splatoon was released with squids as the main characters, a collaboration to this was also made, called “Sagakeen.” The game Splatoon features the concepts of “riches of the mountain” and “riches of the sea,” which are taken from the festivals in Saga Prefecture. By January 31st of 2016, many events in the prefecture such as stamp rallies, rides on the cruise ship “Supura-maru” and others are scheduled to be held. “Supura-maru” is a play on words with the name of the game “Splatoon” and “maru” which is common in Japanese ship names.

Additionally, the consumption of red bean jelly (youkan) in Saga Prefecture is of a considerable amount. In one city called Ogi City, also known as the Youkan City, there are over twenty youkan shops lined up in a street. The Ogi-Youkan, the most popular youkan in Ogi City has a crispy exterior made from recipes passed down from for generations. Ever since the Edo Period, sugar has been easily obtained in Ogi City and because of this, the production of youkan has always been popular and these red bean jellies have been treasured as a popular and nutritious preservative food. In Ogi City, there is an old, yet established sweets shop called the Muraoka Company (Muraoka Souhonpo), where the youkan production factory of this company is open to the public. On the first floor of the factory, photos and videos of how youkan have been made throughout history are shown, and on the second floor, the tools used to make youkan are exhibited.

On the hills of Yoshinogari City and Kanzaki City in Saga Prefecture, there is a large settlement surrounded by a moat that dates back to the Yayoi Period called the Yoshinogari Site. The area is protected as Yoshinogari’s Historic Park and is considered to be an informative site in understanding our ancestry from the abundance of extensive documents and information. Many buildings such as the raised floor warehouse, Hottate pillar buildings, which are buildings made with pillars dug directly into the ground, pit-houses, and raised floor cabins have been rebuilt, allowing visitors to experience the entire scene of the seven-century-long Yayoi Period. There are also many programs in which visitors are able to take part vicariously in what it was like to live in the Yayoi Period.