Hello, everyone! This is Hiro. It seems that the flu is going around, so please be careful! 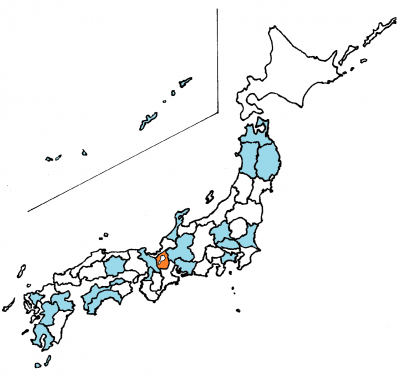 Let me introduce Shiga Prefecture this time. The first thing that perhaps came to your mind when reading the title, “Shiga” was the Michigan State in the United States, right? If you read our previous column on Michigan last week, you might have recalled that Shiga and Michigan are sister states due to their renowned lakes. Speaking of lakes, let me provide some information on the Biwa Lake. Biwa Lake is the largest lake in Japan, and you may, you notice from looking at the map that it is located right in the middle of the prefecture. At a glance, Biwa Lake may seem incredibly large, but it only takes up one-sixth of the area of Shiga. Nevertheless, it does not change the fact of how large the lake is.

Shiga Prefecture was once close to Japan’s capital during the Heian Period. A distinguished transportation system via the Biwa Lake had been established, hence the prefecture prospered as a key terminal that led to other areas. It was such a vital lake in history that many Japanese generals of the past have said, “He who rules Omi (the land that surrounds the Biwa Lake) rules the nation.” With this historical background, Shiga Prefecture has many historical buildings. To the north of the lake lies the Nagahama Castle, built by Hideyoshi Toyotomi, and to the south, the site of Yukari Nobunaga’s Azuchi Castle. Other well-known landmarks include the Hachiman Moat, Hikone Castle, and the Enryaku Temple stands on the Hiei Mountain in Otsu City.

When the Toyotomi Family established a castle town, the Hachiman Moat was dug in order to connect the town and the Biwa Lake. Nowadays, you could take a tour of the Hachiman Moat on a sightseeing ship. As the atmosphere of the castle town is a historically preserved site, it is also a famous location for filming historical dramas in Japan.

Furthermore, Hikone Castle, along with the Matsumoto Castle, Inuyama Castle, and Himeji Castle, is designated as a national treasure. Hikone Castle even has a mascot called Hiko-nyan. I have been to the Inuyama Castle and Himeji Castle and though I am not obsessed with castles, I would like to visit the Hikone Castle and the Matsumoto Castle one day.
Kouka City, on the border between Mie Prefecture and Shiga Prefecture, is notable for Kouga No Sato (known as the Ninja Village) and ninjutsu (the skills of martial arts practiced by ninjas). You could enjoy visiting the ninja house full of ingenious mechanism, or learning how to behave in a shuriken-dojo (a training hall for throwing knifes). I strongly recommend you to travel to Shiga, full of historical allure!