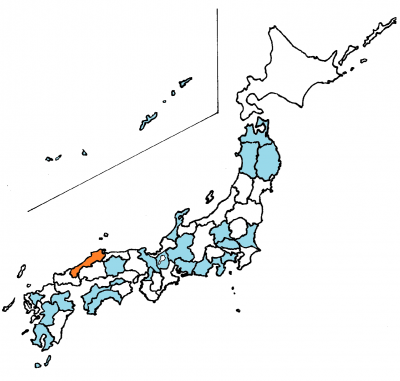 Hi, it’s Fumi. This year is a leap year, which happens once in every four years. How did you all spend February 29th? This week I would like to introduce Shimane Prefecture, the home of Kei Nishikori, the famous tennis player. Much to my embarrassment, up until the time I visited Shimane Prefecture, I was unable to distinguish between Shimane Prefecture and Tottori Prefecture. Do you all know where they are? The citizens of Shimane Prefecture are known for their longevity. The female lifespan and the population over the age of 65 are both ranked second out of all the prefectures in Japan.

When speaking of Shimane Prefecture, most people think of the Izumo Taisha (shrine). In the old lunar calendar, October is known as the Kannazuki, the month where there are no presence of Gods, but in the Izumo Area, it is called the Kamiarizuki, the month when Gods are present. Every year around this time, Gods from all around the country gather at Izumo Taisha to hold a marriage conference of males and females. It is believed that because of this ritual, October is known as the Kamiarizuki in Izumo while it is known as the Kannazuki in all other areas. Izumo Taisha is old enough to be recorded in the oldest record of history in Japan called the Kojiki (Records of Ancient Matters), where many tourists come to worship the God of Marriage, the Okuninushi Okami every year. Displayed at Izumo Taisha’s Kaguraden (the floor for dance performances and a shrine office) is the world’s largest Oshimenawa, an enormous rope weighing 4.5 tons.

When paying a visit to Izumo Taisha, please be advised that we must bow twice, clap four times instead of twice in other shrines, and then bow once. You may wonder why we must clap four times. Well, a kind resident who has lived in Shimane for 75 years told me the reason when I went to see the sunset at Lake Shinji in the Shimane Prefectural Museum of Art, which was voted in the top 100 sunset viewing sites in Japan. He told me that we must clap four times because four is read as “shi” in Japanese, and when we put our hands together, it is called “awase.” Combining the two words together makes “shiawase,” which means happiness.

There are other prominent marriage spiritual spots. Yaegaki Shrine in Matue City is famous for its “Fortune-Telling Mirror Pond.” Here, you float a coin and put it on a sheet of paper, and watch how it sinks to the bottom of the pond. If the coin sinks quickly, it means that you are likely to meet your life-long partner very soon, and if the paper with the coin floats away, it means you could expect to be with a person far away.

Izumo is also widely known for its buckwheat noodles and was ranked as one of the top three buckwheat noodle producing cities in Japan. Typically, the noodles are put in a round shikki, a Japanese lacquerware, stacked up in three layers, but some restaurants serve the Kamaage buckwheat noodles, which are cooked in Japanese cauldrons. The toppings are the classic chopped leeks, seaweed and bonito flakes, but an increasing number of stores are starting to serve Momiji-Oroshi, which is referred to as grated maple for its color even though the ingredients are actually grated white raddish with chili.

Additionally, one of the oldest hot springs in Japan, the Tamatsukuri Hot Spring, is known to produce a beautiful skin. There are also many other sites popular to young women, such as the Tamatsukuriyu Shrine or the Seigan Temple with its famous Oshiroi Guardian Statue. If you are not interested in marriage, you could perhaps visit Iwami Ginzan, Shimane’s pride and World Heritage.

I was very moved by the wide variety of tourist sites, the kindness of local residents, the power spots and the prefecture’s delicious cuisine that I would not hesitate to become Shimane’s resident. I strongly recommend going to Shimane Prefecture for your spring break vacation!