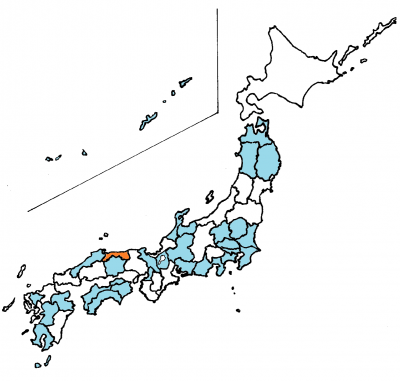 A mere one year has passed since the opening of the first Starbucks in the prefecture. Tottori emerged into the news channels grandstanding images of over a thousand people cueing in line for its grand opening. The reason behind being the last prefecture to have welcomed the big conglomerate coffee house is unquestionably to do with its population. With a population of only 570,000 people, Tottori ranks the lowest in the country; as many residents as Tokyo’s Suginami-ku with 560,000 people.

With Tottori, many Japanese would associate the prefecture with the famous Tottori Sand Dunes. The actual charm of Tottori however, takes pleasure as a hometown for seafood delicacies of the Matsuba Crabs, rock oysters, and white squids. Other local specialties that the tourists must try include the Tottori Beef, Nijyu-isseiki (21st Century) Pears, shallots, and beef ramen.

After naming Yonago Airport as “Yonago Kitaro Airport” in April 2010, it was later renamed and renewed as the “Tottori Sakyuu Detective Conan Airport” in March 2015. Some may have conjectured from this naming that Tottori Prefecture is the home to famous manga artists such as Shigeru Mizuki and Gosho Aoyama, known for their popular series of “Ge-Ge-Ge no Kitaro” and “Case Closed (or “Meitantei Conan” in Japanese)” respectively. In 2012, when the 13th Annual Worldwide Manga Summit was held in the prefecture, Tottori was named as the first and foremost “Manga Kingdom” upon this occasion. Since this denomination, Tottori is committed to hosting and initiating events in enlivening manga culture and the prefecture.

On a final note, The Hare of Inaba Pilgrimage Tour that includes the visitation to shrines in tributes to the Oriental Zodiacs and Lucky Eight, is an imperative agenda for traveling to Tottori. For your information, the Hiyoshi Shrine is dedicated to this year’s animal zodiac of the monkey. You may further want to acquire a handmade tenugui (a traditional Japanese hand towel) from each shrine and get it specially stamped as a protective charm in virtue of your visit. Why not enhance your luck by visiting these propitious shrines and pay your respects at the altar?