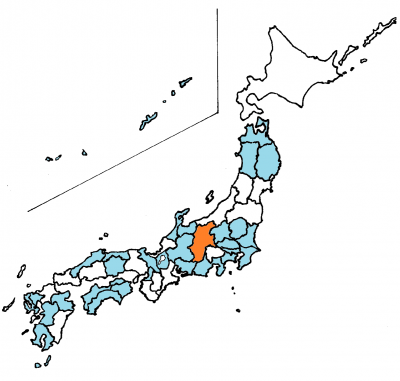 Hi, everyone! Ayaka here. We hope that you are not overwhelmed by the rainy season.

Do you remember the Nagano Olympics in 1998? You might be too young; today’s students up to the 11th grade were not even born yet! These Olympic Games were a showcase for the natural beauty of Nagano Prefecture (also called Shinshu). Here we will give a brief introduction to this prefecture.

In the wintertime, Nagano is all about skiing. There are dozens of ski resorts throughout the prefecture; only Hokkaido has more. I tried snowboarding in Nagano, but I was always distracted by the amazing mountain vistas of the Japanese Alps. But Nagano is also a beautiful summer destination. Places like Karuizawa are famous for their lush, green, forested landscapes. If fact, it’s a great place to go all year round!

But what about the people that actually live there? Did you know that the inhabitants of Nagano have the longest average lifespans in Japan? There used to be a large number of stroke-related deaths in the region, perhaps due to the fact that salty, conservable foods are popular in the cold, snowy climate. But the prefectural government created plans to reduce the sodium intake and increase vegetable consumption. While men in Nagano have traditionally had very long lifespans, the new diet plan increased those of women as well! And there is another important category in which Nagano comes in first: happiness. The “Happiness of the Citizens” ranking, Nagano ranked #1.

Nagano’s most famous tourist attractions include Zenko Temple, or Jigokudani’s Wild Monkey Park (where you can observe monkeys bathing in the hot springs). There are also several famous castles, including Matsumoto Castle and Ueda Castle, the latter being the shooting location for this year’s Taiga drama program. And speaking of entertainment, Nagano has long been a popular subject for famous novels and films. Mamoru Hosoda’s famous film Summer Wars, was filmed in Ueda City. You may have a distinct image of Nagano from the all of the media it has been featured in, but we highly recommend that you come and see its beauty for yourself!