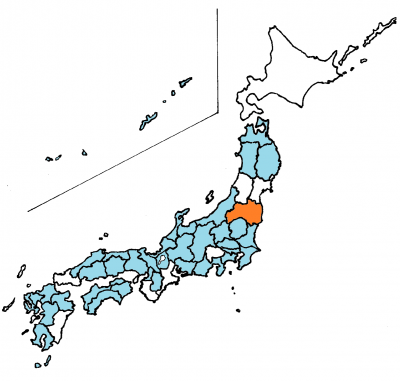 Today we will take a look at Fukushima, the prefecture located in the southernmost area of Tohoku.

Fukushima is the third-largest prefecture in Japan. It is divided by the vertically-oriented Abukuma Plateau and the Ouu Mountains into three geographical regions: Aizu, Nakadori, and Hamadori. The climate and the culture of each area differ considerably, and it is said that the prefecture’s residents find the idea of a unified “people of Fukushima,” slightly unnatural.

Now let us introduce each province.

① Aizu
Aizu Wakamatsu is the major city within this region. This area is known for its particularly harsh winters, with heavy snowfall and low temperature. Yet, on the other hand, it is also tremendously hot in the summer, and therefore is renowned for being the rice-producing region in Fukushima. Most of Fukushima’s tourism industry is located in Aizu as well, coming from historic monuments such as Tsuruga Castle (Aizu Wakamatsu Castle) to sites rich with nature such as Mount Bandai, Lake Inawashiro, and Goshiki Swamp. This area is also the birthplace of Hideyo Noguchi, and at the Hideyo Noguchi Memorial located in the town of Inawashiro, you can tour the house where he was born. You can also visit Iimori Hill, the memorial of the Tragedy of the Byakkotai (a military unit of the Aizu Domain). And if you get hungry after visiting many historical sites, you can try the famous Kitakata Ramen!

② Nakadori
The major cities here include the prefectural capital Fukushima, Koriyama, and Shirakawa. Nakadori is the prefecture’s main transportation hub: it contains the Tohoku Expressway and the Fukushima Airport, and is the only region with a service from the Tohoku Bullet Train. The climate of Nakadori is not as cold as that of Aizu, and as it is located in a low-lying basin, it becomes considerably humid during the summer. This also results in it being famous as a fruit-producing region. The peaches grown in Nakadori are especially exquisite and are selected for the tribute to the Imperial family. In addition, Miharutaki cherry blossoms flourish in this region. They are considered a natural national treasure, and have been selected as one of the five major cherry trees in Japan. And as for tourist sites, Abukuma Cave, a limestone cave which was formed over the course of around 80 million years is well-known.

③ Hamadori
Major cities are Iwaki, Soma, and Minami-soma. Since it faces the Pacific Ocean, this region has a comfortable seaside climate, and the summer air is cooled by breezes from the sea. The winter is moderately warm and it hardly ever snows. Since the Kuroshio Current and the Oyashio Current collide off the coast of Fukushima, the fishing industry is quite successful and fresh, diverse seafood such as Mexicali, bonito, flounder, monkfish, and pike are all found in large numbers. But the specialty of Iwaki, sea urchin kaiyaki (loads of steamed sea urchin on top of a seashell) is a masterpiece! On land, tourists now flock to the Spa Resort Hawaiians in Iwaki City, where you can catch a performance by the famous Hula Girls dance troupe. A recent trend in Hamadori streetfood has seen the rise of Namie Yakisoba (fried buckwheat), which won first place at the festival of B-grade Gourmet.

The catchphrase for Fukushima is “Utsukushima, Fukushima (beautiful Fukushima).” With a diverse area so large that it actually feels like three prefectures, it is hard not to find something beautiful. Please visit Fukushima to feel the charm of each area!