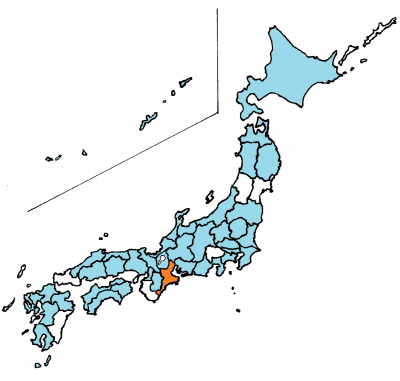 Today we’ll introduce Mie Prefecture, which is located right in the middle of Japan.

As many of you may know, on May 26th and 27th of 2016, the G7 Ise-shima Summit was held in the Mie Prefecture. Prime Minister Abe, President Obama (USA), President Hollande (France), Chancellor Merkel (Germany), Prime Minister Cameron (UK), Prime Minister Renzi (Italy), Prime Minister Trudeau (Canada), European Council President Tusk and EU Commission President Juncker attended the Summit to debate on significant issues such as the world economy. This brought the world’s attention to Ise-shima, which the Prefecture was able to show off many of its tourist attractions.

● Ise Jingu (Ise Shrine)
Known simply as “Jingu,” this famous shrine is dedicated to the Sun Goddess, so naturally you can enter and worship from five in the morning. Its most famous area is separated into an inner shrine (naiguu) and outer shrine (geguu). However, there are 125 smaller shrines scattered around the complex. Out of these 125 shrines, 14 are within the inner/outer Ise Shrine, and every 20 years they are home to a special ceremony in which the main shrines are exactly rebuilt right next to the current shrine in order to renew the buildings.

● Toba Aquarium
One of the biggest aquariums in Japan, Toba has over 1,200 exhibits, and is known to be the only place in Japan that has dugongs. There is also another famous, yet comical, tradition the aquarium has: the welcoming ceremony, where new employees must receive their letter of appointment underwater. Their first task then on the job is to wipe the glass of the exhibits in front of the customers.

● Shima Spain Village Parque España
There is also this unique theme park, which is based on the motif of a Spanish village on the edge of the Mediterranean Sea. Not only can you sample delicious Spanish cuisine, but you can also visit several buildings built in Spanish-style architecture, including a medieval castle!

Ise-shima isn’t of course the only place to visit in Mie prefecture. The Nagashima Spa Land, located in Kuwana city, has more thrilling rides and attractions than you can count. The “Steel Dragon 2000” was given the Guinness World Record for “Biggest Rollercoaster” when it opened in the year 2000. At 97 meters high, this ride is not exactly for the faint-hearted.
Further, in Iga city, known historically as the home of Ninjutsu, there is a museum called the “Iga-ryu Ninja Museum.” If you are a fan of ninjas, then this is your place. There are more than 400 ninja related items displayed, including a real shuriken that was used hundreds of years ago. There is also a place where you can enjoy thrilling ninja shows. This place is highly recommended to foreign tourists.

And finally, we have not mentioned the delicacies yet: Mie is also filled with amazing exquisite gourmet, such as Ise lobsters, oysters, shellfishes such as abalone and clam, and the Matsuzaka beef.

The amazing attractions Mie has to offer do not all fit on a short list such as this, so why not personally check it out for yourself?