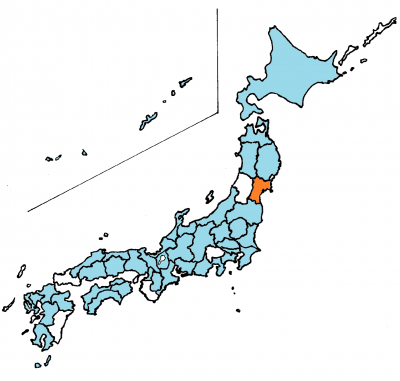 Hi, it’s Hiro! I’m going to introduce Miyagi Prefecture, which is full of charm throughout all four seasons. Some of you may already be planning to go skiing in Zao or to visit the renowned hot springs in the coming months, so let me summarize the best parts of the prefecture.

The most thriving city is Sendai, Miyagi’s capital. Sendai is also known as “Mori no Miyako (the capital of the forest),” where “Mori” symbolizes the forest enclosing the shrines, the holy trees within the vicinity of the shrine, and an artificial forest planted to protect the citizens from the harsh weather in winter. This title originates from Lord Masamune Date’s vigorous forestation policy, which made the city of Sendai having the appearance of a forest. Many people pay regard to the Date family’s message of prosperity while coexisting with nature. Respectively, there are various tourist attractions that praise Lord Date. I would suggest visiting the ruins of the Sendai Castle, an observatory where the Date family had resided for 270 years. The statue of Lord Date on horseback is especially appealing. You can also pay respects to Lord Date’s history by visiting the Zuihoden, the mausoleum complex of the Date family, or the Osaki Shrine, which has been designated as a National Treasure of Japan.

Although Sendai is a fascinating city, I cannot go about Miyagi without mentioning Matsushima. Matsushima has been selected as one of the three greatest scenic views in Japan, along with Amanohashidate in Kyoto and Miyajima in Hiroshima. A sightseeing cruise tour around the 260 islands that constitute Matsushima will make you realize just how much Japan is blessed with natural beauty. If you are fortunate, you might be able to take pictures with the seagulls that occasionally fly around the ship. Other attractions I recommend include the Godaido (Buddhist Temple) or Zuigan Temple. Basho Matsuo, the author of the travelogue, “Oku no Hosomichi” was one of many people captivated by Matsushima. You might have heard the haiku that goes: “Matsushima ya, aa Matsushima ya Matsushima ya.” Even though is said that this was not actually written by Basho, many people nevertheless sympathize with it.

Moving along with the specialty dishes of Miyagi. When you begin your journey from Sendai Station, there is an “Ox Tongue Road,” where shops specializing in ox tongue are lined up with long queues of tourists as well as even locals. The savory ox tongue set meal costs as reasonable as 1,500 yen. Further, as Miyagi faces the Pacific Ocean, prominent fishing ports such as Kesennuma or Ishinomaki provide fresh seafood. I sampled some oysters when I traveled there and the size and the deliciousness just made it exceptional!

If you have interest in seeing an abundance of nature, history, and local flair, you may want to choose Miyagi!