YGC wishes all of our readers a very happy New Year! We only have three more prefectures to go! Let us begin this year with Yamaguchi Prefecture. Yamaguchi is located at the westernmost tip of Honshu, the main island of Japan. The prefectural capital of Yamaguchi is Yamaguchi City. 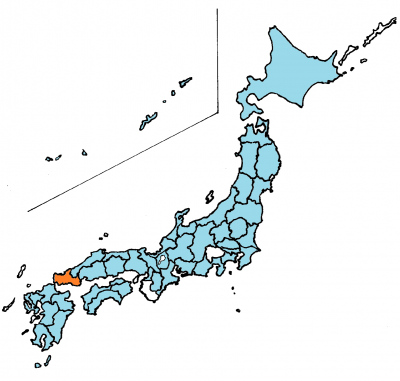 Yamaguchi is generally divided into four parts:
(1) The northern region
Hagi and Nagato are the major cities of the northern region, which faces the Sea of Japan. This region is home to the renowned Shoka-son Juku (a preparatory school), established by Shoin Yoshida. Many famous patriots who had active roles in the closing days of the Edo Period and the beginning of the Meiji Restoration, such as Shinsaku Takasugi and Hirobumi Ito, were educated at Shoka-son Juku. Considering the significant influence the alumni of this school exerted, fans of history would find this a must-see stop on a tour of Yamaguchi. The same could be said for the town area around Hagi Castle, which still retains much of its Edo Period atmosphere, with several old samurai residences open to the public.

(2) The western region
The western region includes the cities of Shimonoseki and Ube, and is notable for its natural attractions such as Akiyoshidai and Akiyoshi Cave. Akiyoshidai is a huge karst plateau made of limestone, and while it is beautiful from the outside, it also hides a number of incredible cave systems, the largest being Akiyoshi Cave. With its deep pools of blue water and massive stalactites, it is easy to feel the mystical presence of nature in this park. Even though only 1 kilometer out of a total of 8.9 is open to the public, it is enough to leave anyone in awe.

(3) The central region
The Hofu Tenmangu (Shrine) lies in the center area of Yamaguchi. In addition to being the first Tenmangu to worship Sugawara no Michizane (the God of learning), it is also known as one of the three Great Tenjin Shrines that worship Sugawara no Michizane, along with the Kitano Tenmangu in Kyoto and the Dazaifu Tenmangu in Fukuoka. Located in the same area is the five-story pagoda at Ruri Koji, considered a national treasure. It is said it was established in order to pray for the Bodhi of Yoshihiro Ouchi. This temple is representative of the Ouchi Clan, which flourished during the Muromachi Period while supporting Kyoto.

(4) The eastern region
Lastly, the main cities in the eastern part of Yamguchi are Iwakuni and Suo. The traditional Kintai Bridge in Iwakuni is a beautiful work of five wooden arches spanning the Nishiki River. Crossing the bridge leads you to Iwakuni Castle, but you may also walk under the bridge and along the river if you wish. Visitors who climb the castle tower can look back on the bridge from above, and out over the ocean where the islands of the Seto Inland sea are visible.

As you can probably tell, Yamaguchi is a large, diverse prefecture. Multiple visits are encouraged in order to receive the fully rewarding experience that is has to offer. So for your next trip, consider Yamaguchi; fresh seafood and luxurious hot springs await!