In this article we will be taking a look at Tokushima Prefecture, which brings us to having covered all the prefectures in the Shikoku area!
» Ehime, Kagawa, Kochi 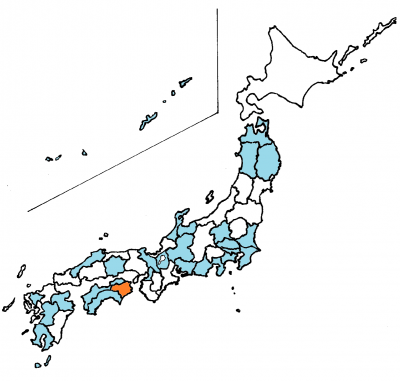 Taking the airplane or train to Tokushima is the easiest way, but we recommend driving through the Akashi-kaikyo Bridge from Kobe (Hyogo Prefecture), bypassing straight through the Awaji Island, and finally entering Tokushima through the Naruto Bridge. This way, you would be able to experience a refreshing driving experience while appreciating the great ocean view. Also keep in mind that under the Naruto Bridge you can enjoy a walk all whilst being able to witness one of the world’s largest whirlpools from an extremely close distance. Incidentally, this time around March to April is the best season to catch a glimpse of the whirlpools!

Tokushima is very unique in the sense that it is the only place in Japan that lacks a certain essential infrastructure. Take a guess (hint: it is something very common in the metropolitan area that we frequently utilize). The answer is…electric-powered trains! Though there are trains that run throughout Tokushima, they are not actually electric-powered; rather most of them are still diesel-powered. The locals call them Kisha (which loosely translates it to a steam locomotive), despite not being steam-powered.

Nevertheless, Kinki-Shyaryou (a railroad company) developed a train that operates on a self-recharging battery module called “Smart BEST” and they plan to spread it across Tokushima. Kinki-Shyaryou conducted a test drive in 2014, putting an end to the long absence of electric-powered trains in Tokushima. “Smart BEST” is set to be launched to the public in 2022 and it would not be long until we start to revel in electric-powered trains to and from Tokushima.

Tokushima is surrounded by a vast wilderness. There are many great tourist attractions for those nature-lovers, such as Miyoshi City in Tokushima. In Miyoshi, get a charge of climbing beautiful mountains such as Mt. Tsurugi or go kayak riding/rafting in the rapids of Ooboke and Koboke. When in the Okuiya region, you could view the Okuiya-Nijyuu-Kazuraya Bridge constructed by the Taira’s (an ancient Japanese family which ruled Japan at the time) 800 years ago and scope out the world’s largest monorail (by length, difference in elevation, gradient and height), the Okuiya-Tourist-Monorail. On the monorail, why not indulge in a 70-minute long journey while delving the vast and untouched wilderness of Tokushima?

Tokushima is widely popular for its world-class whirlpools; however its Awa-odori festival is equally well-known and captivating. During August 12th to 15th, Tokushima will be hosting one of Japan’s largest Awa-odori festivals. It may be a little early to plan, but why not consider visiting Tokushima this summer!